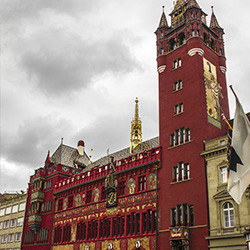 This week’s destination is not a city, it is an entire country. As we have participated at ECMC2013 at Bern, we have decided that it was an important destination.

So our protagonist is this country located just by the Alps and filled with cheese, chocolate, banks and bikes! Switzerland is an interesting country surrounded by France, Germany, Austria and Italy but it’s not part of the European Union.

The first thing you notice is that it is a very multilingual country, using one language or the other of a majority according to each “canton” (equivalent to a state).

With one of the highest GDP per capita in the world, the country’s economy has always proven to be very strong. It has been diversified over all decades in various sectors, being the most important chemical and pharmaceutical industry, the manufacture of musical and measurement instruments, real estate, financial services and tourism. The country has very low taxes and free markets. There is an exception to free market, wich are the agricultural products controlend under strong protectionism by the product of the country, which has contributed to rise food prices.

Although the country is outside the EU, its borders seem to indicate the opposite. Switzerland has many free trade agreements with Europe and other countries, which greatly facilitates the importation of goods. Its connection with the other territories of the continent is evident, it is only necessary to look at Basel, which has direct train access to France and Germany. Freight railroads in one of the main strengths of the city. Transportation in Switzerland is very comfortable, there are several airports and countless roads and railway junctions.

Providing transport services to and from Switzerland is very simple, however you have to remember that as it’s not part of the EU, any item you send will pass through the customs control. It is recommendable to plan with time in order to avoid delays in exports and imports.

In Switzerland we offer all kinds of courier and freight services. Export and import shipments of personal effects for private customers and loads mainly trucks, but also seafreight services through Basel container terminal (in the Rhine River) and of course urgent airfreight through Zürich, Geneva and Basel.